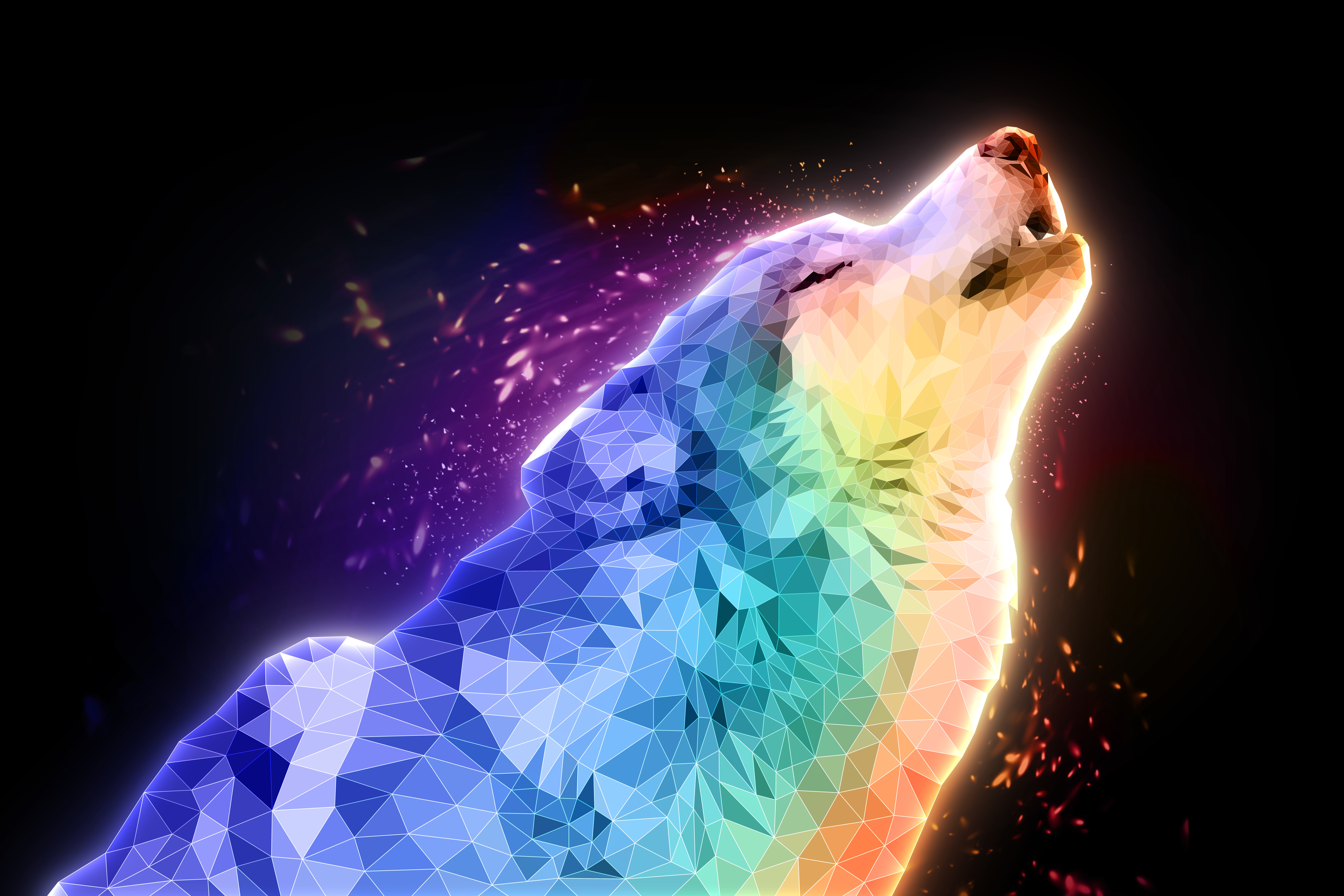 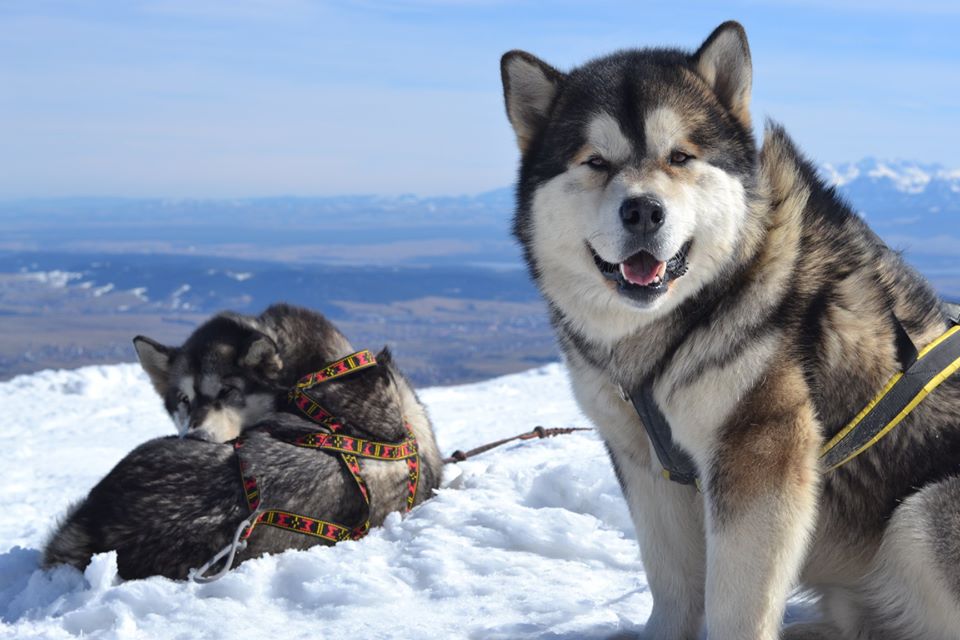 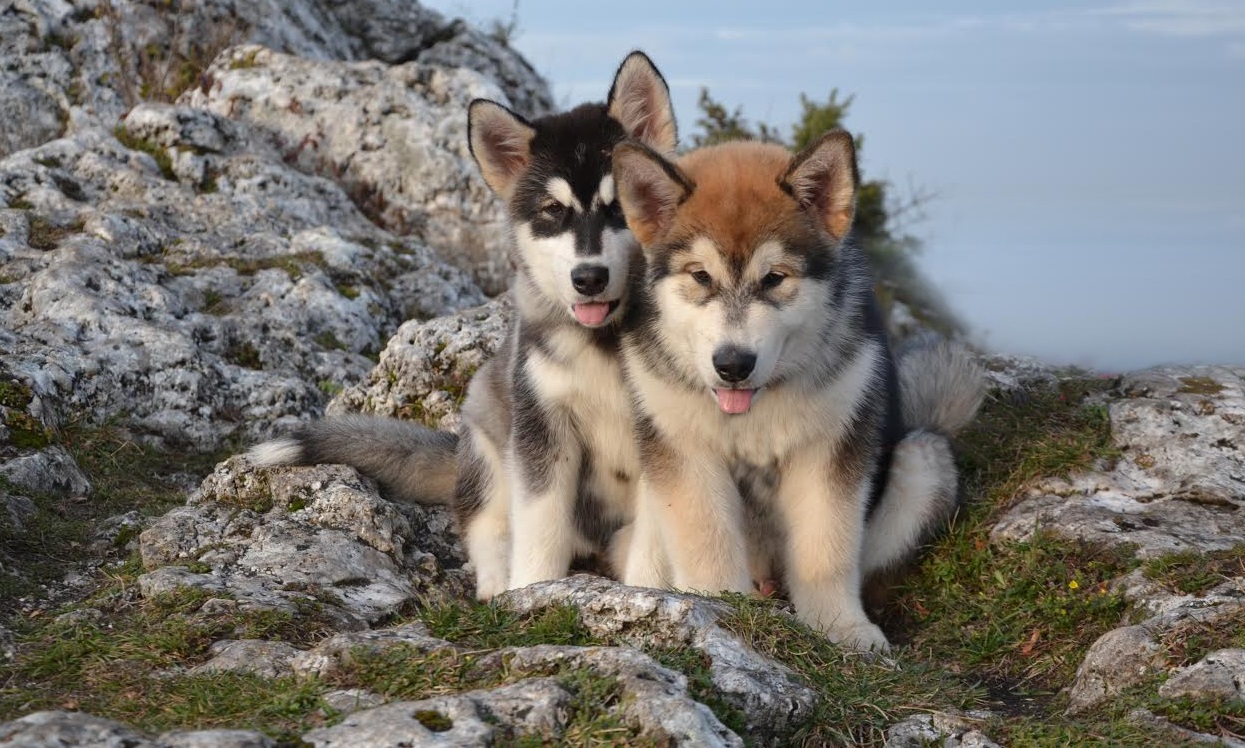 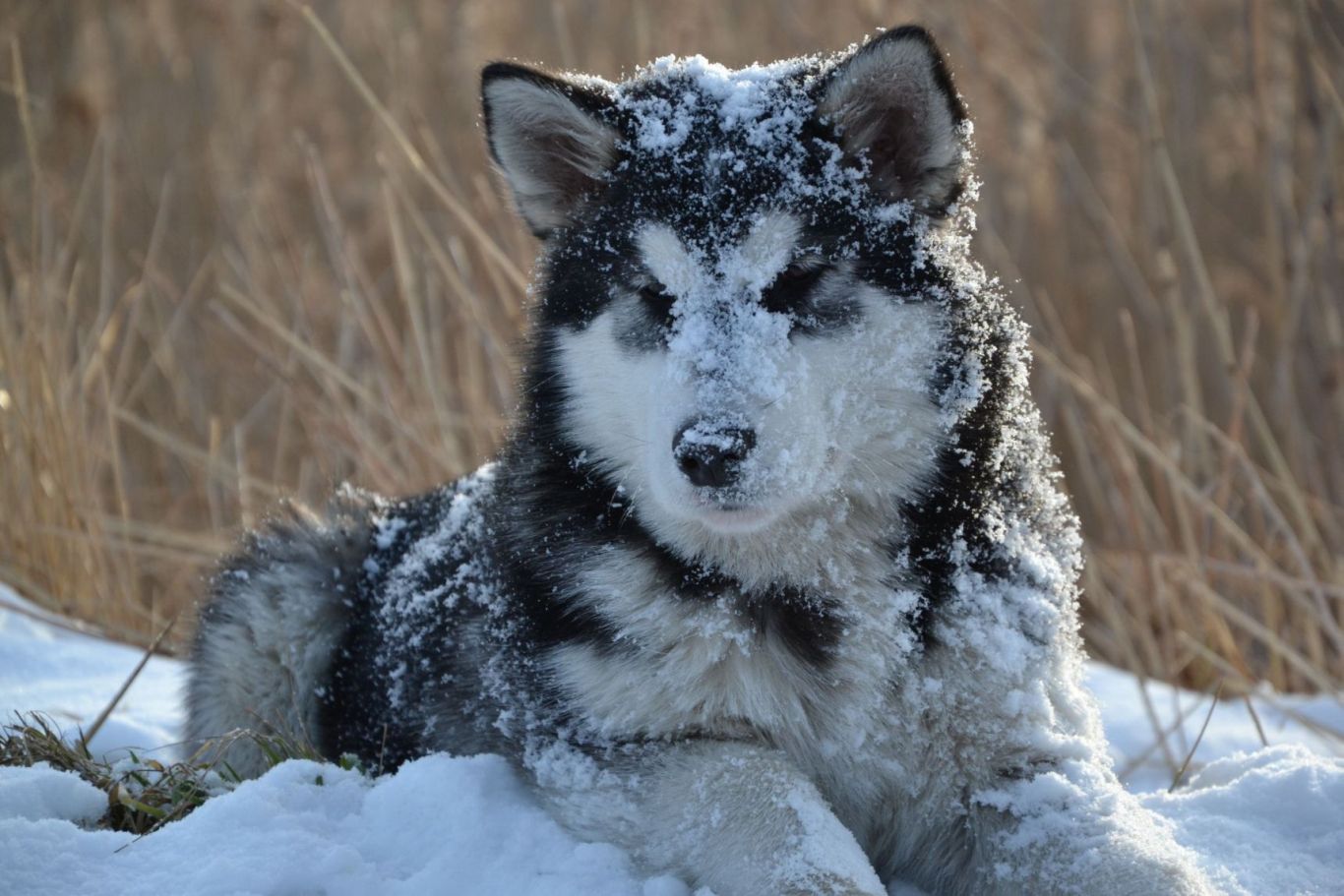 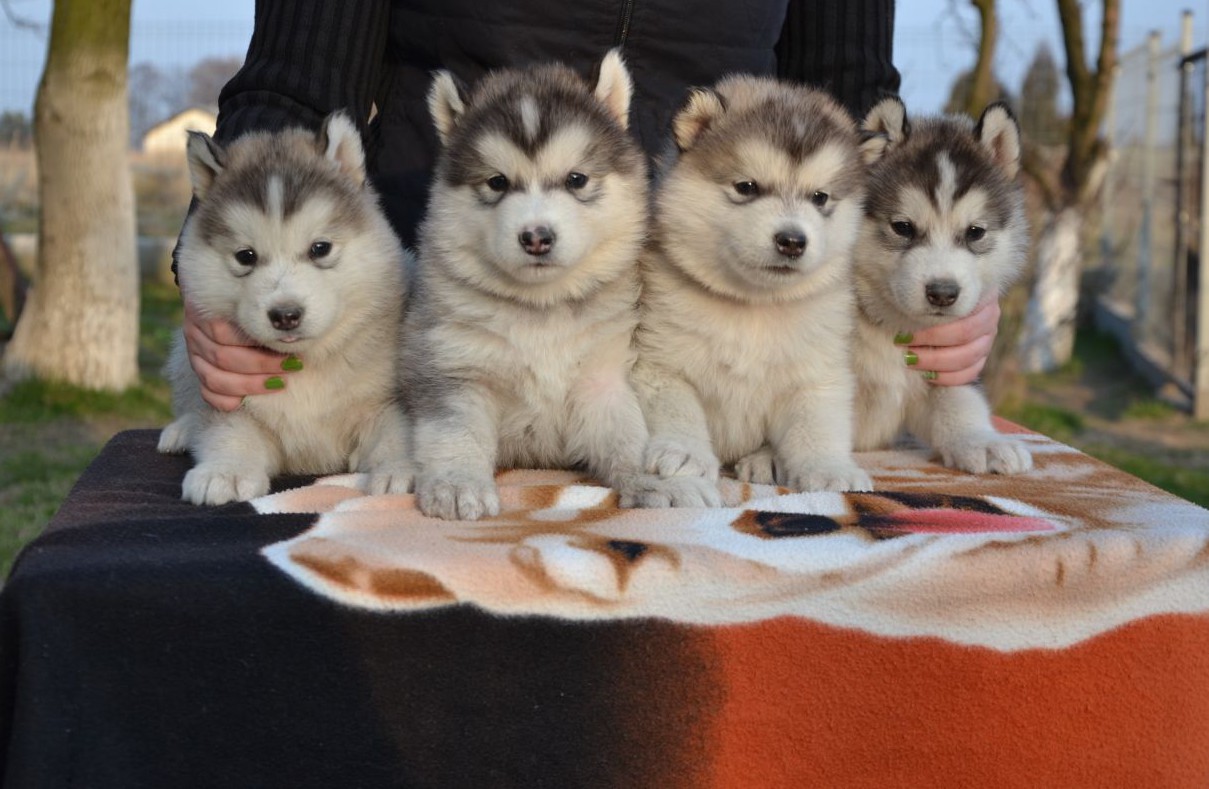 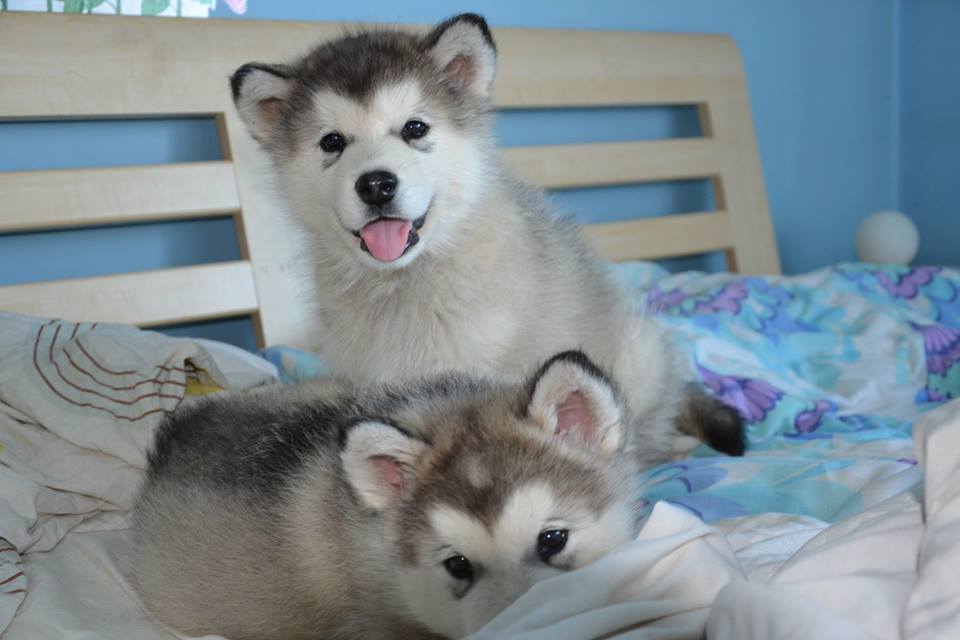 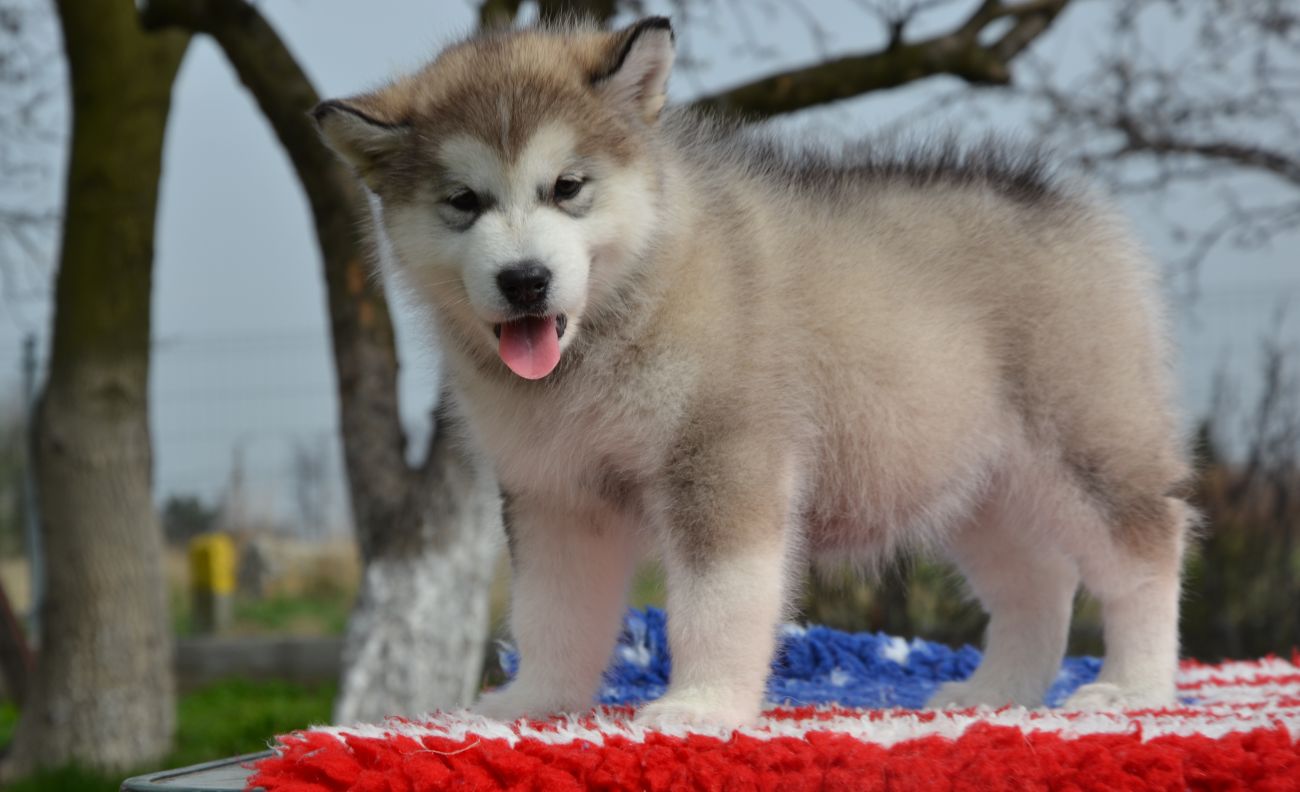 HOW OUR MALAMUTE BREEDING STARTED? 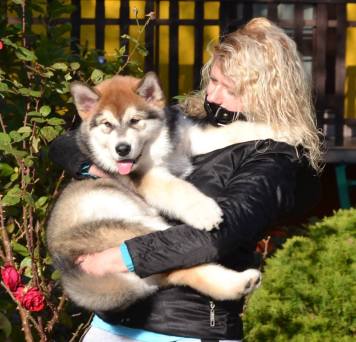 We are enormous dog lovers and we call ourselves dog persons for a reason. Dogs were our companions since our childhood – usually, they were mixed-breed pups. We started our own family in 2008 and we began to learn about various dog breeds – we were searching for one which could fit our lifestyle, as we are active people, we can’t sit in one place for long.
In those days Huskies were a very popular choice and we thought it will be a good dog for us. But our curiosity and the access to the internet allowed us to encounter the information regarding other northern breeds and Alaskan Malamute. The debate “Husky or Malamute” was long, but finally, we’ve decided that Malamute is the way to go. A year later our first girl - HOPE Sadacki Gazda – appeared in our house. She was so little, and we fell in love instantly. It wasn’t easy at first, as such breeds are not simple to teach, they require a lot of engagement and patience. Hope taught us how to treat Malamutes – she always dragged the leash, howled constantly, and our garden started to look like a minefield. We became crazy about Malamutes and tried our luck in dog shows. Our love for the breed became even stronger.
When you have only one Alaskan, you usually decide that it looks sad alone and you get a second one. We also thought about “enlarging the pack.” In 2012 we’ve got the second girl from the breeding kennel Srebrny Kiel in Slupsk. Perla (DREMAY BLACK PEARL Srebrny Kiel) as she is called, became a great companion for hope, both girls liked each other and played together for hours (and we had two strong dogs to run after during our walks). In 2014 we’ve decided to breed an elite pack – Hope was crossed with a Hungarian dog, while Perla got together with a beautiful male from Romania. The pups were so nice that we decided to leave one girl from each litter and thus another two Malamutes joined our pack. But there was still something missing, we were thinking about expanding our little family and getting a male was an exciting option. After all, you cannot call yourself a breeder if you don’t have a male, right?
What kind of Malamute breeding kennel to choose? Which Malamute will be the most popular? In 2016 we’ve finally decided and found a dog from Great Britain with a fabulous pedigree. Finnick is our pride, has a nice character and it seems that he will be a spectacular male. We are planning to start our race through different shows, so some of you may see him in the ring.
We are a small Alaskan Malamute breeding kennel. We had a couple of wins during Polish and international shows. Our girls got the titles of “Young Beauty Champion” and “Polish Champion”. When we look for a good partner for them, we try to choose only the best, the cream of the crop. Oftentimes we go abroad to cross our dogs. 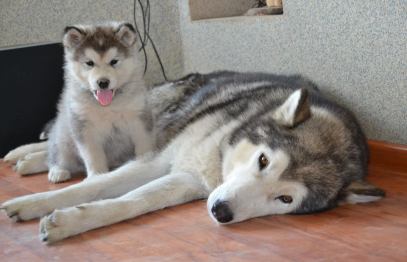 When we bought our first Malamute we didn’t think we will start a professional breeding kennel. We needed 3 years with our girl to consider it. We just wanted to try and see how our lives will change when we have our first litter of cute Malamutes. We searched for a partner and we’ve found a great one nearby. We set up a date and… all our knowledge about dog copulation turned out to be wrong (how is it possible that it takes so long? Does it hurt? And so on).
But we did it, Ultrasound confirmed that we will have our first little Alaskan Malamutes. The worst was yet to come – our girl had to give birth. We read thousands of articles and books and we thought we are ready, but when the time came, the emotions overcame us, our hands were shaking, and we didn’t know if everything is going according to plan. We stayed with our girl till the early morning, as the birth usually starts during night time. The toil ended when the sun came up and we had our 8 healthy malamute puppies. Our first steps as breeders were traumatizing, thus we didn’t decide to try the second time for years. 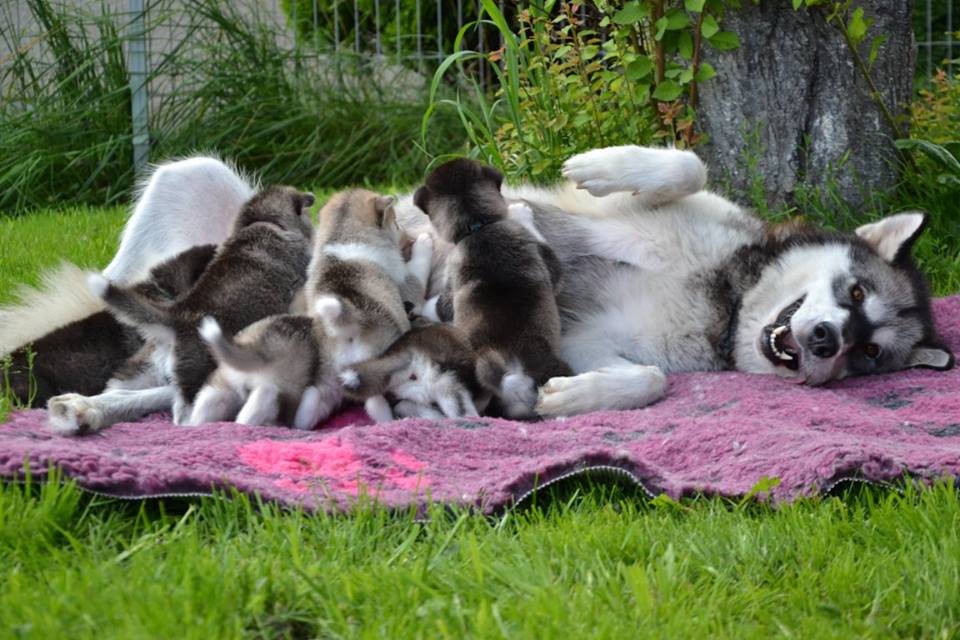 That’s the first question that came to our mind when we got our first litter. For the first 3 weeks, it’s easy, as pups rely largely on their mother to take care of them, while humans have to change the sanitary pads and check if the puppies are ok. Getting to know those little rascals is a pleasure. All our Malamutes are born in a special box ion the corner of our bedroom (it was as such during the first birth and it will stay that way). We want to spend as much time as possible with our little Malamutes, talk to them and caress them, so they will accept humans faster. After about three weeks, depending on the number of pups and the quantity of milk the mother gives, we begin to feed the little ones 4 times a day and the real “fun” starts. You have to run after them with a large bowl, sponge, and a mop – it’s a standard equipment of every breeder. Droppings are literally everywhere! Usually, the mother eats most of them, but if there are too many pups, even she loses her energy.
The kids grow up rapidly and the box becomes too small pretty fast. When the humans lose their strength and we decide to let out the pups to the garden for the first time, it doesn’t last longer than an hour. The time spent outside is longer each time till the cubs spend a whole day in the yard. Mother keeps them company and shows them fun things like digging large holes, while we try to give them something more to do, give them toys to chew. We try to keep puppies and mother close as long as possible, as she is the best teacher for them and socializes them. Cubs grow even larger and after 8 weeks they can be given a new home. When all leave, we are sad of course. But we believe we’ve chosen proper owners for them and they will manage to train them well. Pups that are born in our home are treated as our own children and we try to take part in their raising and training. We also like to help their new owners to prepare for dog shows. 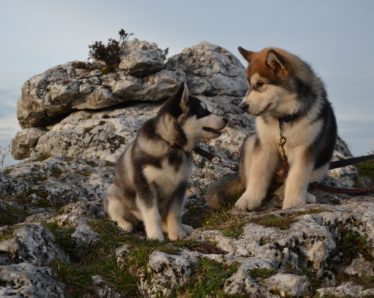 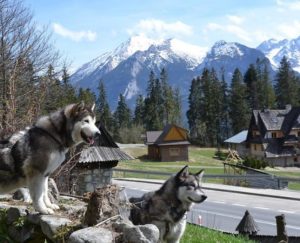 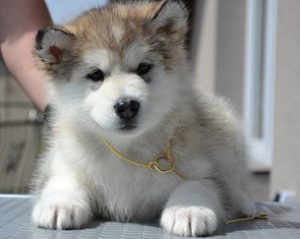 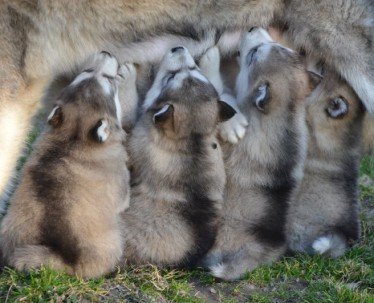 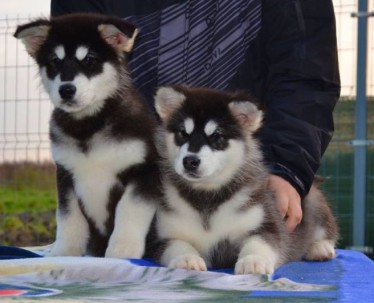 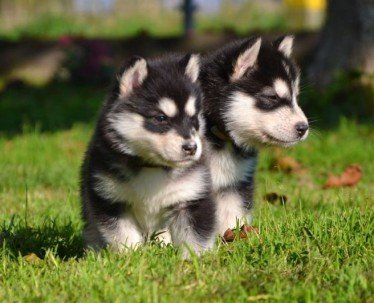 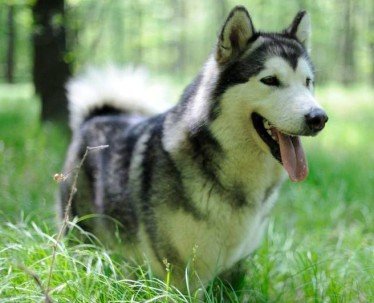